While there are as many motivations to support scientific research as there are philanthropists, one that is nearly universal is the desire to make an impact. France Córdova, president of the Science Philanthropy Alliance, recently noted, “When I talk with foundation heads, the word most frequently used is ‘impact’—they want their investments to make a difference.” This desire for impact leads many science philanthropists, especially those interested in supporting basic science, toward underexplored paths within the research landscape. Beyond the aim to fill gaps in specific research topics or fields of study, though, there remains an underexplored, underfunded opportunity to make an impact by supporting Minority-Serving Institutions (MSIs).

The category of MSIs includes a variety of institution types, including public and private, rural, urban, and suburban. Included in that are many research institutions—both emerging and well-established—that confer doctoral degrees in the STEM fields. As research enterprises increasingly understand that diversity, equity, and inclusiveness can catalyze scientific discovery and innovation, MSIs offer philanthropists an opportunity that aligns well with the kind of long-term, outsized impact that so many seek.

At the Alliance, a shared interest group was created in response to the growing interests of philanthropic science funders to support underrepresented groups in STEM as well as culture change in scientific research enterprises. As of September 2022, the group has 40 members representing 20 different organizations. Similar types of groups have also emerged within other funder collaboratives, including at the Health Research Alliance and Open Research Funders Group.

Aligned with this interest by many funders to foster more diverse talent and environments, MSIs have broad reach and proven effectiveness in supporting these efforts. The National Academies’ 2019 consensus report on MSIs showed that they enroll 30 percent of all undergraduates in the U.S. in higher education, producing one-fifth of the nation’s STEM bachelor’s degrees, and train many that go on to graduate and start successful careers. Lorelle Espinosa, program director at the Alfred P. Sloan Foundation and co-chair of the consensus report, underscores the intentionality of MSIs. She stresses that such intentionality “drives the creation of programs, practices, and policies that are tailored to recognize and address student differences across multiple dimensions: academic, financial, social, and with cultural mindfulness.” MSIs’ approaches can serve as a model to engage, train, and work with diverse individuals who have STEM aspirations.

Similarly, many philanthropic science funders have priorities in promoting scientific outreach and engagement that fit well with the strengths of MSIs. Geared toward building the public’s engagement with, understanding of, and trust in science, the Alliance is ideally situated to see trends forming in this area and has seen a growing rise in the number of funders prioritizing this type of grantmaking alongside more traditional research funding. In 2019, six philanthropic organizations started the Science in Society Funder Collaborative with strong interests in supporting this work at the intersection of science and society. 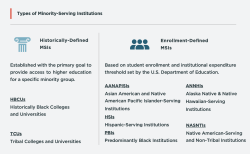 From those initial six organizations, the network has grown to 12 science funders supporting a network of leaders directly working in this space.

For their part, MSIs have established trust with the communities they serve, according to Victor McCrary, vice president for research at the University of the District of Columbia—one of 107 Historically Black Colleges and Universities (HBCUs)—and vice chair of the National Science Board. As such, MSIs are excellent thought partners to advance scientific outreach and engagement, especially for challenges, like infectious diseases, climate change, renewable energy, and water/food security, facing their communities. McCrary notes that many of the public health problems we saw during the COVID-19 pandemic came down to “a question of trust and connection to the community.” With trust, communities are more likely to believe research outputs and the recommendations coming from research institutions to guide their understanding of, engagement with, and response to scientific issues.

Despite the strong alignment between MSIs and philanthropy MSIs receive only limited philanthropic funding. Twyla Baker, president of Neuta Hidatsa Sahnish College, the tribally-chartered college of the Three Affiliated Tribes, reinforces this discrepancy from the perspective of Native American organizations: “[These indigenous organizations] across the board of different issues receive only 0.4% of philanthropic dollars.”

“[MSIs] are used to stretching a dollar, but [they] would rather not,” says Adele de la Torre, the first woman and first Latina to serve as a permanently appointed president of San Diego State University, a Hispanic-serving Institution (HSI).

Tips for Philanthropic Engagement with MSIs

To better understand this disparity and how science philanthropy can better-support MSIs, in December 2021 the Alliance convened a roundtable discussion with philanthropic funders and MSI leaders. The perspectives of Baker, de la Torre, and McCrary provided meaningful insights into the MSIs they represent and beyond.

“There is an enormous disconnect [between funders and the environments they seek to influence]—it is a problem but also presents itself as an opportunity,” said Baker. Tribal Colleges and Universities (TCUs) protect the interests of their community. For research, it’s about asking, “What does the community like to happen, as opposed to bringing in issues for the community?”

“There is an enormous disconnect [between funders and the environments they seek to influence]—it is a problem but also presents itself as an opportunity.”
— Twyla Baker, President,
Nueta Hidatsa Sahnish College

De la Torre noted, “We are often chasing dollars that do not fit…due to metrics (of evaluation) that only fit the most elite research institutions. Often, the financial capacity of the institution to ‘match’ funds is weighted in such a way as to quietly disqualify most MSIs. That’s an artifact of a different time, where the model of federal funding privileged access to research funds to larger public and Ivy League institutions.” De la Torre recommended developing RFPs where MSIs “would be on an equal footing, or even provided additional consideration given the commitment and opportunities they will provide to their diverse faculty and student populations.”

McCrary stressed the importance of viewing these relationships as more “transformational than transactional,” requiring a mindset change among science funders. He highlighted the importance of coming into these conversations without condescension but as equals, and encourages funders to do weekend visits to understand MSIs and what they offer.

Delving into the unique role of philanthropy in the funding landscape, another question focused on what funding gaps would be best suited for philanthropy to support. De la Torre suggested focusing on endowments to support emerging private-public partnerships (P3s) in MSIs. According to de la Torre, supporting this intersection is important not only for funding critical projects when and where state dollars are not available, but also for advancing research into practice and its applications. This would also facilitate workforce development in the communities the MSIs serve, which would further stimulate economic development and greater wealth in historically underserved communities. Despite this multiplied impact, “no one is funding these types of MSI projects or recognizing the true levels of their economic impact,” said de la Torre.

Baker echoed de la Torre’s comment on the importance of supporting the workforce in MSIs. Because of their often-rural settings, Baker shared that it can be difficult to bring in people to work at tribal colleges. This circumstance and their already limited staff hinder their ability to respond to funding opportunities when they arise. Baker shared that when these opportunities come her way, she often asks if there is money or resources to do this work.

Building capacity was a trend across the responses during the conversation—McCrary shared that funding “endowed research chairs and research administration supplemental grants” would be unique for philanthropy. He also highlighted the importance of engaging with minority technical organizations, such as the Society for Advancement of Chicanos/Hispanics (SACNAS) and Native Americans in Sciences and the National Organization for the Professional Advancement of Black Chemists and Chemical Engineers (NOBCChE), which help keep students in STEM academic programs.

Other philanthropic funders were curious about the characteristics of a successful partnership between MSIs and other research institutions. De la Torre stressed that this is a deeply rooted issue that requires system-level solutions and approaches. She urged funders to pay close attention to how resources are distributed, observing that “even in the best partnerships, there is inequity.” All panelists highlighted the importance of sustained relationships.

Isaac Agbeshie-Noye, director of diversity, equity, and inclusion at Howard Hughes Medical Institute, asked what sustainability looks or feels like in terms of relationships between science philanthropic funders and MSIs. Baker thought of a 20–25-year research project that looks at traditional foods that exist on the reservation. “[This project] isn’t just about culture but is also relevant to how we live and threats to food structures,” said Baker, reinforcing the importance of listening to the research directions of MSIs and the need for long-term engagement.

“I realize it’s not your job to teach the rest of the world,” Atherton concluded, “but I also want to acknowledge how useful it is for us to hear you and to begin to learn on our own what we need to be doing and doing better.”

“[Minority-serving institutions] are often chasing dollars that do not fit…due to metrics [of evaluation] that only fit the most elite research institutions. Often, the financial capacity of the institution to ‘match’ funds is weighted in such a way as to quietly disqualify most MSIs.”
— Adela de la Torre, President, San Diego State University

Building the Foundation for Sustained Philanthropic Engagement with MSIs

Although the relationship between science philanthropy and MSIs is still evolving, the Alliance has seen a growing number of examples in recent years of philanthropists advancing the roles of scientific enterprises by engaging with and supporting these important institutions.

For example, with an understanding of the resource limitations in MSIs, the Burroughs Wellcome Fund, is working to form long-lasting partnerships with HBCUs, HSIs, and TCUs and to support their research capacity. Toward this goal, they recently made a commitment to grant at least 20 percent of their funding to underserved institutions, which include MSIs.

The Simons Foundation, on the other hand, is also bolstering others’ established relationships with MSIs. For example, the foundation has partnered with the Morehouse School of Medicine to support Morehouse’s summer undergraduate research program at Harvard University. Inspired by a recent visit to Spelman College, the foundation also committed $5.7 million to faculty there to address the high teaching loads often observed in HBCUs.

Finally, the Sloan Foundation created a grantmaking area specifically designed to harness the great talent and undergraduate diversity at MSIs. The Creating Equitable Pathways to STEM Graduate Education initiative supports educational pathways for Black, Indigenous, and Latinx/a/o students from MSIs to enroll in STEM graduate programs through innovative partnerships. The program’s inaugural investment of $5 million in 2021 funded 20 grants across 66 partner institutions. One such grant between Northern Arizona University and their partners, Diné College and Northern Arizona University-Yuma, aims to increase the number of Indigenous and Latinx/a/o students in STEM graduate programs.

Many philanthropic funders are developing blueprints to increase their systemic engagement with and support for MSIs in transformative and sustained ways. At the Alliance, we are enthusiastic to support this vision and the work of new and established science philanthropic funders to further advance scientific research and impact.