Skip to main content
<< Return to XO Files
Share Share Share
Viral infections modify and transform the functioning of individual cells. They do this not just for humans, animals, and plants, but also for the microbes that drive the Earth’s carbon cycle. Could this tiniest form of life impact the balance of nature on a global scale? 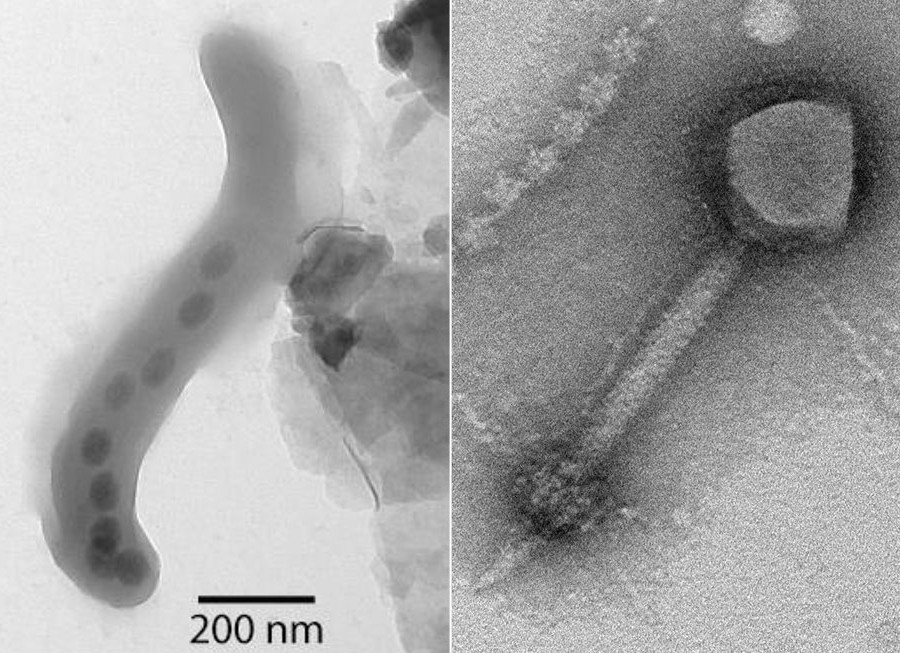 Ebola, HIV, influenza—even the common cold. Each of these maladies reinforces the commonly-held belief that viruses are harmful parasites that are potentially deadly to their host. The virus’ ability to disrupt human health belies its relatively simple form—it’s no more than a microscopic package of genes wrapped in a molecular shell. But when a virus infects a living cell, it can commandeer the genetic machinery of the host to replicate itself. What is not widely understood, however, is that not all viruses are bad for their host, or for the world around them.

Viruses infect all types of living cells, including those of animals, plants, and microbes. Indeed, the targets of most viruses are microbes—including the ubiquitous bacteria living in soil, lakes, and throughout the oceans. Viruses play a critical role in altering the fate of individual organisms, and potentially that of the Earth’s ecosystems. In effect, viruses modulate the function and evolution of all living things, but to what extent remains a mystery.

This uncertainty has many causes. For one, viruses are tiny, which makes them more difficult to isolate, study, and understand. A virus is usually one- to ten-thousand times smaller in volume than a typical bacterium, and therefore , like bacteria, are invisible to the naked eye. Viruses seem simple, usually including just a handful of genes. But actually they are wildly diverse and not easy to identify and characterize. There is not a single gene common to all viruses, nor is there consensus about classes of viral genes. And this diversity is itself evolving. Some viruses multiply rapidly, creating a new generation as often as every 20 minutes. Other viruses need only a handful of genes (and a host) to make new copies of themselves, while still others carry hundreds of genes, blurring the lines of delineation from living cells.

The scope of our uncertainty of how viruses shape the planet is compounded by the fact that virus-host interactions operate on a huge scale. A liter of water in the Earth’s surface oceans typically contains hundreds of millions of cyanobacteria (see Figure 2). These bacteria and other oceanic microbes take in carbon dioxide and convert it to organic matter (i.e., new cells and cellular life), and in the process “fix” as much carbon in a day as all of the land plants on Earth. The cyanobacteria, in turn, become the bottom of the marine food chain—food for zooplankton, which feed the krill, which feed the fish and whales. But viruses also infect, transform, and destroy uncounted billions of cyanobacteria every day—they are part of the ecosystem too.

When a virus infects a living cell there are several potential outcomes: it can kill the cell, it can go dormant until activated later, or it can co-exist with that cell for generations. Further, as mentioned above, not all viral infections are bad. They can create immunity to other infections, mediate the interaction of human gut bacteria and the immune system, or preferentially increase the food supply for some types of microbes by killing other microbes, releasing cell debris that is valuable feed material. Thus viruses shape ecosystem-level microbial diversity and metabolic processes. These same features make viruses increasingly attractive to biotechnology researchers who find them useful to deliver drugs and genetic therapies into living cells.

Viruses play potentially critical roles in ecosystems. However, a more detailed quantitative picture is needed to predictively model their impact. Of special note is the urgent need to understand the ecological role of viruses in the Earth’s carbon cycle—how viruses modulate the microbial processes that dominate the fixation and respiration of carbon that in turn modulates Earth’s climate. Microbial populations are now routinely mapped in soils, lakes, oceans, and even within humans, but the corresponding viral communities remain relatively unexplored. In the past, technological barriers impeded our ability to observe these nanoscale partners and investigate their actions. But emerging instrumentation and processing techniques, along with new methods we are proposing, now enable a quantitative understanding and the resulting predictive models for how viruses impact a changing Earth system.

We propose here a systematic study of environmental viruses, especially those that infect microbes, with the overall goal of linking virus-host biology to ecosystems ecology. An in-depth knowledge of viral ecology would lead to insights on the structure and function of living systems on a variety of scales, ranging from genes to ecosystems to the global carbon cycle.

The XO File
How to Probe Earth’s Viral Ecology

The goal proposed here is to study and understand the viral interactions that govern natural ecosystems—in essence, to link virus-host biology with ecosystems ecology so as to develop a quantitative and predictive viral ecology. This will require the development of an inter-connected network of virus-focused investigators, including virologists, microbiologists, molecular biologists, ecologists, engineers, ecosystem modelers, and theoreticians. This network will collaborate with and build on the results of existing research groups and centers that have revolutionized the study of microbes and their ecology.

We propose establishing six core investigator teams and an additional dozen collaborating solo investigators. In addition, we propose repeated field surveys at specific coastal and offshore sites, and two trans-ocean transect surveys, to measure seasonal and geographic variations in viral ecosystem effects. We estimate that $150 million over 10 years will be needed to support both the research groups and expeditionary field surveys.

Specifically, we expect this project to provide answers to questions such as:

One notable recent conceptual advance in viral ecology has to do with cell debris. Scientists have discovered that the process of virus-induced rupture of host microbial cells releases cell debris, which in turn can be used by other local microbes to boost their growth, maintaining the local microbial loop and enhancing ecosystem-level productivity. The rapid turnover of viruses and their microbial hosts suggests that ecosystem responses to changes in climate have the potential to be strongly influenced by virus-microbe dynamics, particularly on the time-scales most relevant to human activities. That we know so little about such an important component of a changing Earth system is daunting, but also exciting—given the right scope of investment.

Prior support from national funding agencies has enabled transformative advances in microbial systems science. However, the majority of such projects have since been retired or scaled back. Indeed, virus-microbe dynamics are not a core priority for any agency, and the emphasis of funding continues to be in areas of human-disease associated virology. There is an extraordinary opportunity for private philanthropy to broaden this focus, influence the entire discipline of viral ecology, and greatly advance our understanding of the dynamics of Earth’s carbon cycle.