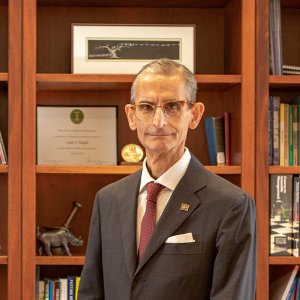 Louis J. Muglia serves on the board of the Science Philanthropy Alliance and is the president and CEO of the Burroughs Wellcome Fund, a private foundation located in Research Triangle Park, NC.

Prior to joining the Burroughs Wellcome Fund, Muglia was the vice chair for research, A. Graeme Mitchell Chair of the Division of Human Genetics, co-director of the Perinatal Institute and director of the Center for Prevention of Preterm Birth at Cincinnati Children’s Hospital Medical Center, and professor of pediatrics at the University of Cincinnati College of Medicine.

Muglia has been involved with the Burroughs Wellcome Fund for more than 20 years. First, as a recipient of a Career Development Award in the Biomedical Sciences in 1995 from the Fund and then as a member of the Advisory Committee for the Career Awards in the Medical Sciences program. He has also been actively involved in the reproductive science funding area, serving on and chairing the advisory committee for the Preterm Birth Initiative.

Among Muglia’s achievements are more than 260 publications and many awards, including the Society of Pediatric Research Young Investigator Award and election to the American Society for Clinical Investigation and Association of American Physicians. Muglia was also elected as a fellow in the American Association for the Advancement of Science and to membership in the National Academy of Medicine. He is an active member of the Society for Pediatric Research, Society for Neuroscience, and the Pediatric Endocrine Society. Muglia served as chair of the Board of Scientific counselors for the Eunice Kennedy Shriver National Institute of Child Health and Human Development of the National Institutes of Health.

Prior to joining Cincinnati Children’s, Muglia was Edward Claiborne Stahlman Professor and vice chair for research affairs in pediatrics at Vanderbilt University Medical Center, and Alumni Endowed Professor of Pediatrics at Washington University in St. Louis.